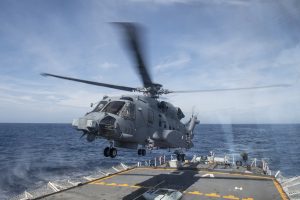 The Royal Canadian Air Force reached a new milestone this summer with the first operational deployment of the CH-148 Cyclone on board a ship. We were invited to interview Major Erik Weigelin on board the HMCS Ville de Québec.

423 Maritime Helicopter Squadron, based at CFB Shearwater, provides the Helicopter Air Detachment (HELAIRDET), callsign Avalanche, on board the HMCS Ville de Québec. As detachment commander, pilot Major Weigelin is in charge of 11 technicians and two flight crews, both consisting of two pilots and two operators. “We are excited to have it in our hands. It’s the first time the CH-148 went ‘over the horizon’ and it’s fun” says Weigelin. 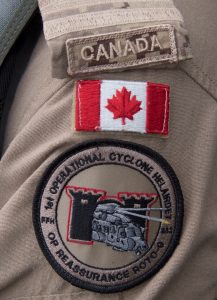 HMCS Ville de Quebec departed the port of Halifax on July 18th 2018 and has been operating in the Mediterranean Sea as part of Operation Reassurance. The ship also took part in the NATO exercise Trident Juncture 2018. Weigelin: “we have been operating the CH-148 for 3 months straight and it is the most consistent operation of the Wing. We fly almost daily and have done 300 hours of flying without any major issues. This consistency in maintenance and flying validates the maintenance program. And we did it all at sea“.

Under Operation Reassurance the ship joined the Standing NATO Maritime Group Two (SNMG2). “We provide presence and show support to the NATO partners. It is the first time we operate the CH-148 with coalition partners. Now we can validate the tactics and training. “states Weigelin. The deployment lasted till halfway January 2019. 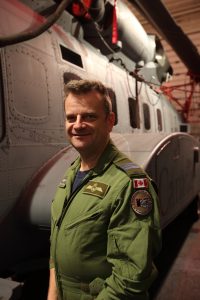 At CFB Shearwater, mostly CH-148 Block 1 and Block 1.2 helicopters are used for training and development. This detachment however is equipped with the most current Block 2.0 variant. This variant is close to the final production version as only some software updates are still to be performed.

During participation in Trident Juncture the CH-148 proved its value. Operating with the invasion force, the CH-148 provided anti-submarine warfare (ASW) coverage for the amphibious landing forces. The CH-148 fought against nuclear submarines of the French navy and Norwegian and German diesel/electric submarines. Both the HELRAS dipping sonar and the deployment of sonar buoys were used in this cat-and mouse game, during which movement lanes for the landing force were cleared from submarines and entrances to the fjorden were guarded from the air. The Cyclone has a dropping carrousel that can be loaded with 10 buoys and a 1.500 feet cable attached to the dipping sonar. Extra buoys, both listening only and pinging versions, can also be carried in the cabin. 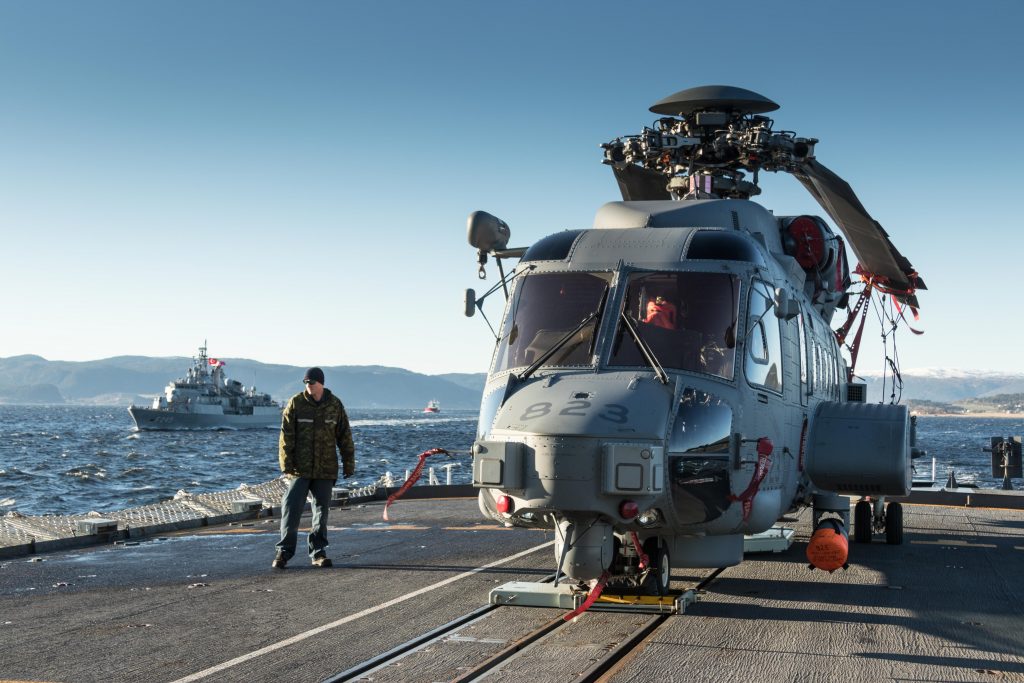 The CH-148 paired up with the Royal Netherlands Navy NH-90NFH that was stationed on board SNMG2 flagship HNLMS De Ruyter. Since both helicopters use the HELRAS dipping sonar system, mutual tactics were developed. Both helicopters operated in a twelve hour window each to provide 24 hour ASW coverage during the whole exercise. When not flying, the CH-148 crew was on an “alert 30” status during the whole exercise, meaning they could lift off within 30 minutes after a call.

The crew room on the ship houses the Mission Planning and Analysis System (MPAS) for the crew, acting as their on board workstation. The MPAS allows the Tactical Coordinator(TACCO) and the Sensor operator to pre-plan their mission and load it onto the CH-148 via a hard disk. The hard disk can also be used afterwards to download a complete record of the mission for review. The collected data are also sent back home to the Warfare Centre for further thorough analysis. Since this is the first operational deployment, one additional mission support crew member is on board for workload assessment. 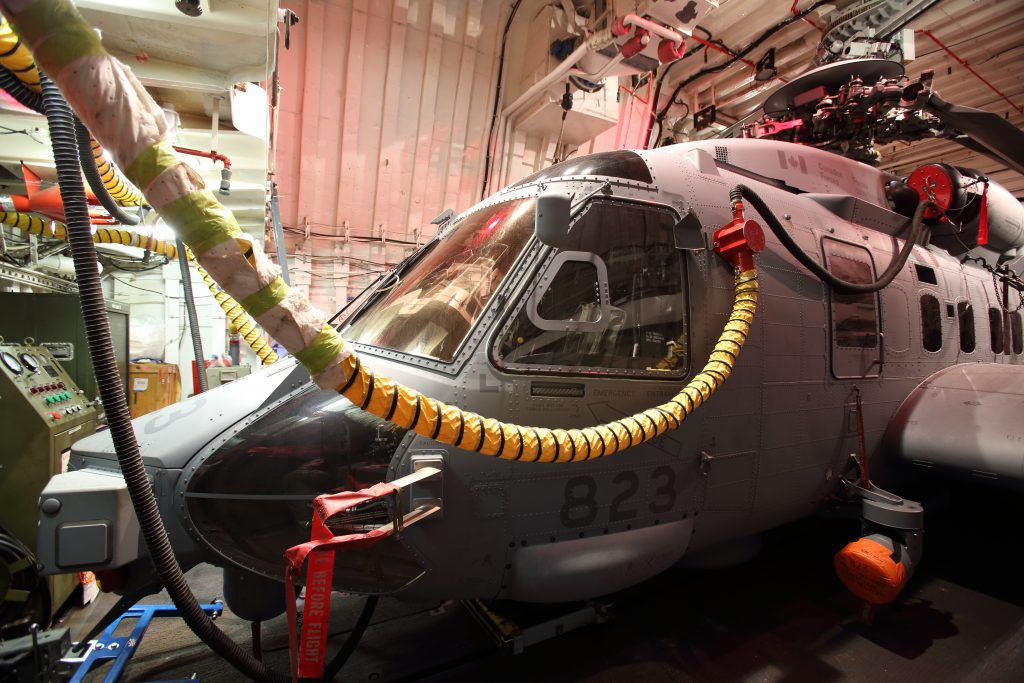 In the future there will be an integrated environment as the ships combat system will be connected to the MPAS system. Trident Juncture saw a large extra influx of gathered data compared to earlier exercises with the CH-124 Sea King, the predecessor of the CH-148. Weigelin: ”It was beyond expectations”. The TACCO sends and receives information to and from the ship via Link 11. The ship itself is Link 16 capable and can modulate data to Link11 format for the CH-148.

The APS-143 multimode radar already proved very effective during this deployment while the ship has been operating in the Mediterranean Sea monitoring migration ships and operating close to Syria. “We can get up and make a quick radar picture of anything around us. We can cover hundreds of square miles instantly. This deployment validates these capabilities. We made a huge step forward and it is very rewarding to see it come to fruition. In ISAR mode we don’t just have a ‘dot’ on the radar but have an actual image of the target with which we can identify the type of ship. And if the conditions are good enough, we can even identify the exact ship. This is a big improvement over the CH-124.” explains Weigelin. “This way we can quickly focus on things that need attention and keep an eye out on a much larger area.”

While the helicopter is NVG compatible, the ship doesn’t have NVG lighting yet. All ships that will carry Cyclones in the future however will be fitted with this. “While flying over water we mostly do instrument flying anyway” says Weigelin. “The NVG acts as a backup instrument. When flying over land though we will get to use the NVG more. “

“We are currently performing regression testing on the block 2 version, checking the testing that has been done on block 1. We will also do more anti-piracy trials during this deployment.” In the future the CH-148 can also be equipped with a 7.62 mm door gun and another one on the ramp for missions like this. Trials with these have already been done. After certification the helicopter will also be able to carry two torpedoes, the first tests with those have also been done already. “I am very impressed with the performance of the CH-148. We knew the Cyclone would be better than the Sea King, but how much better we had to wait and see.” concludes Weigelin.

A big thanks to Major Weigelin and Lieutenant Anglin for their cooperation and for providing some of the photos! 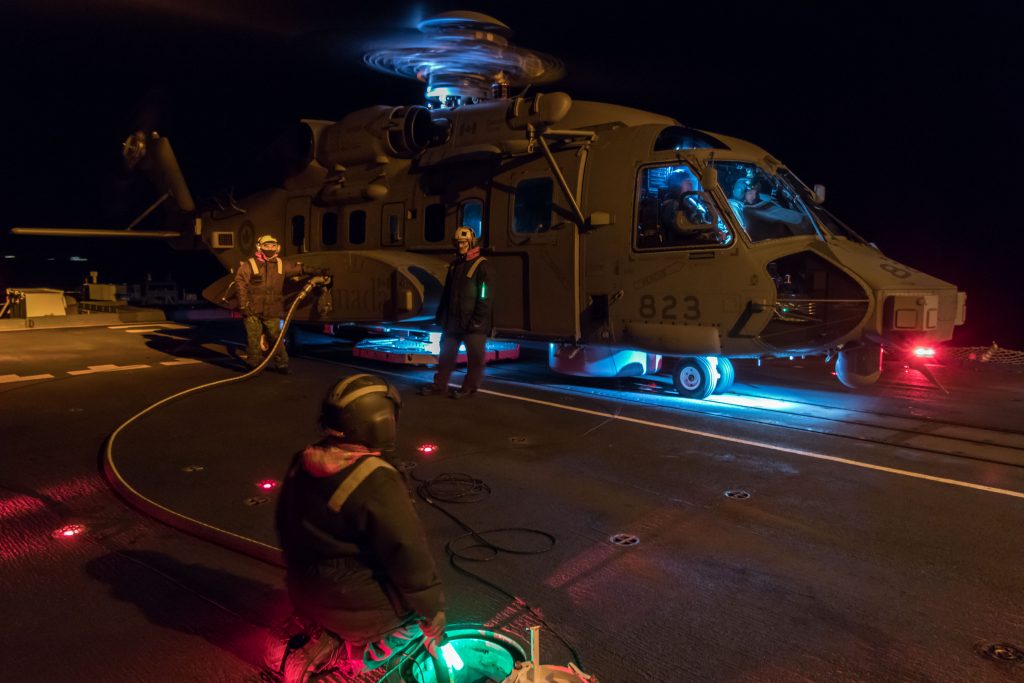