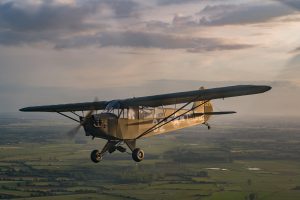 With D-day being 75 years ago, many larger and smaller events were held in the UK and France to commemorate the start of the liberation of Europe. One of those events was “L-birds back to Normandy” which was held at St. André de l’Eure airfield.

Like most commemoration events held, bad weather influenced the participation, but still some 50 liaison aircraft (L for liaison) made it to Normandy. 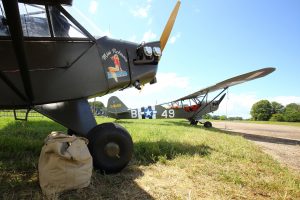 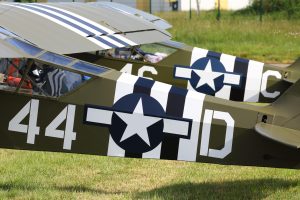 The choice of the location was no coincidence, as this airfield was home to dozens and dozens of L-birds after the Allied troops took over from the Germans. The airfield itself was just a small grass field before the war, but the Germans turned it into a major fighter base during the beginning of World War II. They constructed two long concrete runways, which are still visible today, and flew the famous Messerschmitt Bf.109 and Focke-Wulf FW.190 from here. Later also bomber aircraft like the Heinkel He.111 and Junkers Ju.88 used the airfield, before the Germans were forced to retreat and the Allied forces moved in. After repairing the damage they had caused themselves by bombing the place, they stationed C-47 Dakotas and hundreds of L-birds at the airfield which they designated ‘Allied Field B24’. 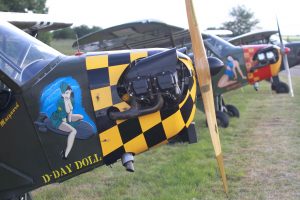 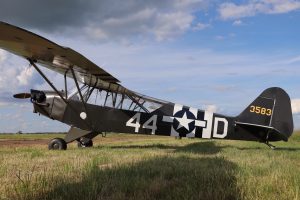 Despite being small, without armour and unarmed, the L-birds played an important role during D-day. They were real multirole aircraft. They transported VIPs, cargo and messages, evacuated wounded soldiers, but they were mostly feared by the Germans in their observation role. As such they served as the eyes for the artillery, reason for the Germans to give a bonus for every L-bird that was shot down! Because of this, the L-birds flew lower and lower, so they could escape enemy fighters. This meant however the view from the cockpit became less, so as a modification the inner part of the wing root of the Piper L-4 Cub (the most abundant L-bird) was replaced by Perspex. That way the observer could look “through” the wings. As a field modification many L-4s were fitted with BC-659 HF radios taken from jeeps, so they could communicate directly with the army on the ground. For those moments radio contact was considered too dangerous, the Cubs carried small bags in which a written message was put after which the bag, with a long orange vane attached, was dropped over the friendly positions. Since they could operate from roads, grass strips and even improvised carriers (regular ships with a wooden flight deck of only 65 m long), they were the first to land in Normandy during D-day.

After the war had finished, most fighter and bomber aircraft returned to the USA, but many L-birds were decommissioned on the spot and stayed in Europe. Today still dozens of them are airworthy, proving the value of the simple but effective designs. Like in ’40-’45 some still fly from nothing more than small grass strips, cherished by their owners. Many of them kept on working hard after the war, serving for pilot training, banner towing and even advertising via speakers attached to the landing gear. 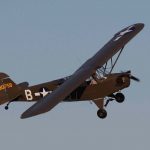 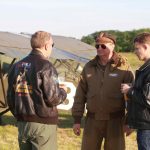 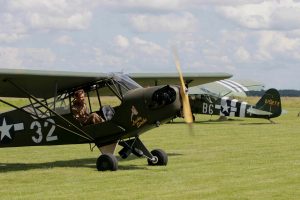 Arguably the most authentically restored L-4 present at St. André de l’Eure was “Lucky Strike” (OY-ECS/45-4627) from Denmark. Her pilot Martin Bech Olesen went a long way to get even the smallest details right, including the colours of the knob on the flaps lever and the system used to wheel out and in the HF antenna. This aircraft was built and delivered as an L-4J, which meant it had an adjustable propeller instead of a fixed one (the only difference between an H- and a J-model). However this turned out to be a rather complicated mechanism, so during WW II right after delivery to units in the field, the mechanics in general removed the adjustable propeller and replaced it by a fixed wooden one! 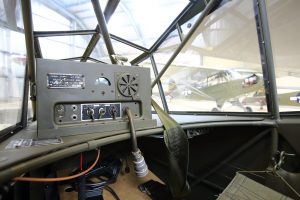 The same happened to “Lucky Strike”, making it effectively an L-4H. The top engine cowling however still shows the shape of the J-version with a hole for the axis that was used to adjust the prop. This cowling was bought as ‘new operational stock’ or ‘NOS’ by Bech Olesen, which meant it was delivered to him still in the original oiled paper it was packed in during 1945! 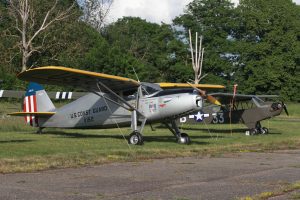 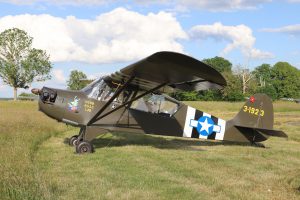 Apart from many L-4s, a rare Aeronca L-3 Grasshopper, some Stinson L-5 Sentinels, two Taylorcraft Austers (the British version of the L-bird), an UC-61 Argus in the colours of the US Coast Guard and a Piper L-14 Army Cruiser were present. Unfortunately the German counterpart of the L-bird, the Fieseler Fi.156 Storch, had to cancel last minute. The only German aircraft present therefor were a Bücker Bu.131 Jungmann and a Bücker Bu.181 Bestmann. 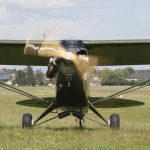 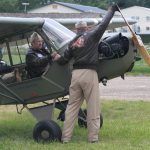 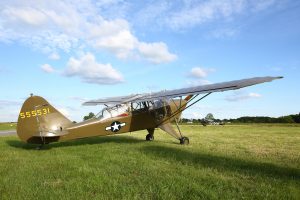 Most unique aircraft at the meeting was without doubt the L-14 Army Cruiser, the only flyable one in the world and possibly even the only one left at all. The type was introduced in 1945, but a large order by the US Army was cancelled as the war ended. It was designed as a flying ambulance, equipped for night missions and designed to fly from rough, unpaved strips. 45-55531 (EC-AAP) is one of only 12 aircraft finished and is restored to its original condition. It is now operating from Cuatro Vientos, Spain, as part of the Fundación de Infante de Orleans. 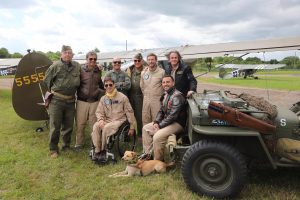 The Spanish delegation at St. André de l’Eure brought their L-14 and two L-4s and included Jose Luis de Augusto, a former flight engineer at Airbus. He was aboard the ill-fated A.400M that crashed at Seville in 2015 and was one of only two survivors. Despite being in a wheel chair since, he trained himself to be able to get in and out of an aeroplane by himself and not only got his pilot license but also acts as instructor pilot nowadays. During the meeting he served as a living example of what you can achieve if you believe in it.

We wish to thank Iza Bazin for the offered hospitality and Martin Bech Olesen and Kenneth Maigaard for the help and information!