n October and November 2018 a large scale air war was fought in the skies above Norway and also parts of Sweden and Finland. Over 250 aircraft from 14 countries battled against each other. All this as part of Exercise Trident Juncture 2018, the largest NATO exercise since the end of the Cold War.

In total over 50.000 military personnel were involved in Trident Juncture at land, sea or in the air. All NATO countries participated, plus partnership countries Sweden and Finland. Main goals of the exercise were ensuring NATO forces are trained and ready to respond to threats and demonstrating NATO stands ready to protect their values, people and territories together. The training part was especially aimed at the units that are assigned to the NATO Response Forces 2019. The air component operated from six airbases in Norway, Sweden and Finland. All participating countries alternated as ‘Blue Forces’ and ‘Red Forces’, furthermore multiple missions were flown to support the land and sea war scenarios. 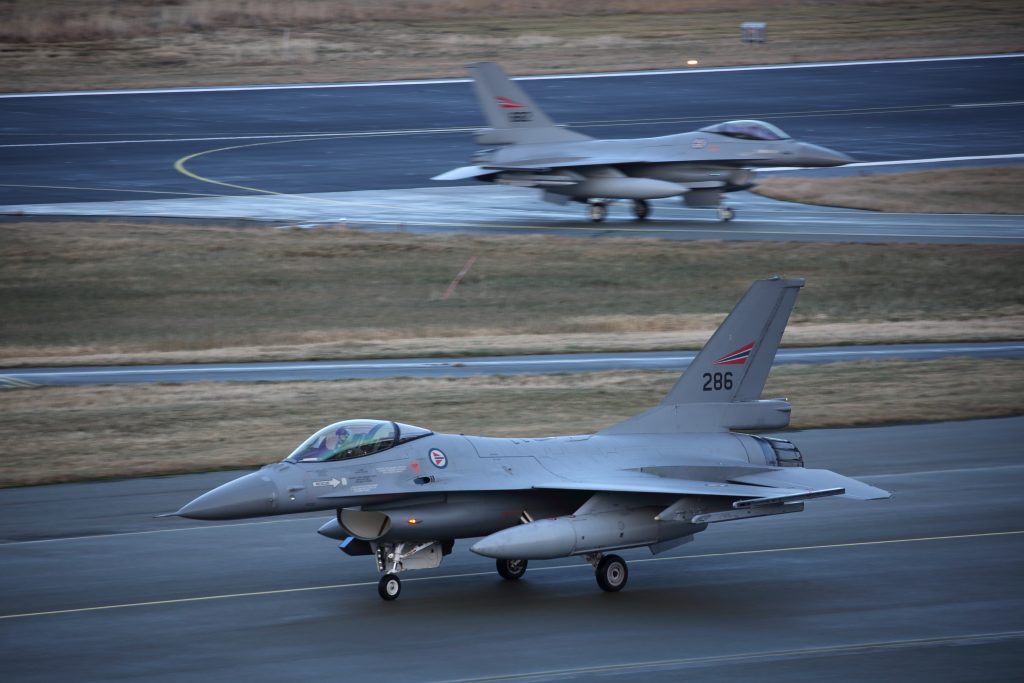 Operating from the Norwegian airbase at Bodø were Canadian CF-188 Hornets, French Mirage 2000s, Swedish JAS.39 Gripens, Italian Tornado’s en F-2000A’s and local Norwegian F-16’s. They got support in the air from tanker aircraft from Italy and Canada. For electronic warfare both a classic Norwegian Falcon 20 and a brand new Italian E.550 Gulfstream participated. Apart from during daytime also in the evening and even in the weekends multiple missions were flown daily. 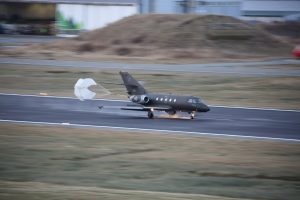 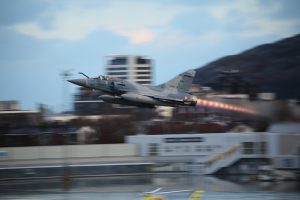 That also other, non NATO member states were interested in what was happening, was clearly shown by the fact that two Russian Tu-160 bombers came by to take a closer look. Also a Tu-142 maritime reconnaissance aircraft showed much interest. 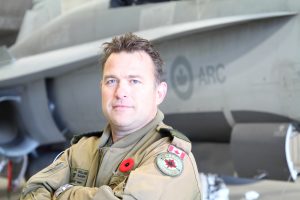 Col. Radiff in front of one of his jets

We were invited by the Air Task Force Commander of the Canadian detachment, Colonel William Radiff, to have a brief look behind the scenes. Normally Radiff is base commander of CFB Bagotville, home of the 3rd Fighter Wing. During Trident Juncture Radiff was based at Bodø airbase in Northern Norway, where he was responsible for 8 CF-188 Hornets, 2 CP-140 Aurora’s and a CC-150 Polaris plus almost 250 men and women.

The CP-140s operated from Andøya airbase with 61 staff members and supported the maritime components of the exercise. Main tasks were anti-submarine and surface warfare. The Polaris acted as tanker aircraft from Bodø, not only filling up the Canadian jets but almost all other participating fighter aircraft as well.

401 squadron at CFB Cold Lake were the high readiness fighter squadron at the time, and to validate their state they deployed 8 of their CF-188A Hornets aircraft to Bodø airbase via stops in Bagotville and Keflavik in Iceland. Such flights are often accompanied by a CP-140 acting as a so-called ‘Duck Butt’ in case one of the pilots has to bail out over the ocean, but in this case the fighters flew together with the Polaris and the Auroras went separate. The Hornets operated in standard configuration, with three external fuel tanks and an LM Sniper pod. Additionally they all carried an ACMI pod (Air Combat Maneuvring Instrumentation pod), model P4, on one wingtip, like all the participating fighter aircraft. This enables the crews to debrief the missions as all the aircraft’s in-flight data are recorded. 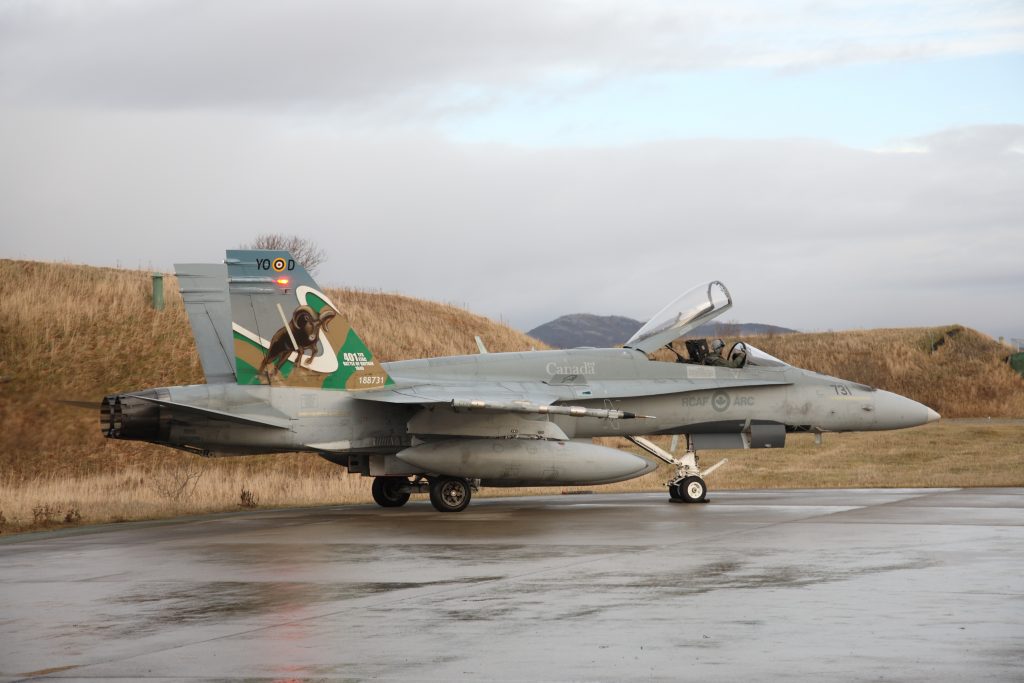 Radiff explained: “the main roles of the CF-188 during the exercise were, like we requested, offensive and defensive counter air and air interdiction (strike) missions. But we also flew other types of missions when needed, like close air support”. For the different mission types no changes had to be made in the configuration, as the board computer of the Hornet was able to simulate all different kinds of weapons needed, like guns, rockets and bombs by using so-called rolling codes. No live firing was included in the exercise. Missions were flown in the morning, afternoon and night, even in weekends. Radiff: “for the night missions, NVS 9 night vision goggles are available. Using them is aircrews choice, but everybody does use them. Like in Canada, there is only few artificial lighting here, so using NVG is rather standard”. 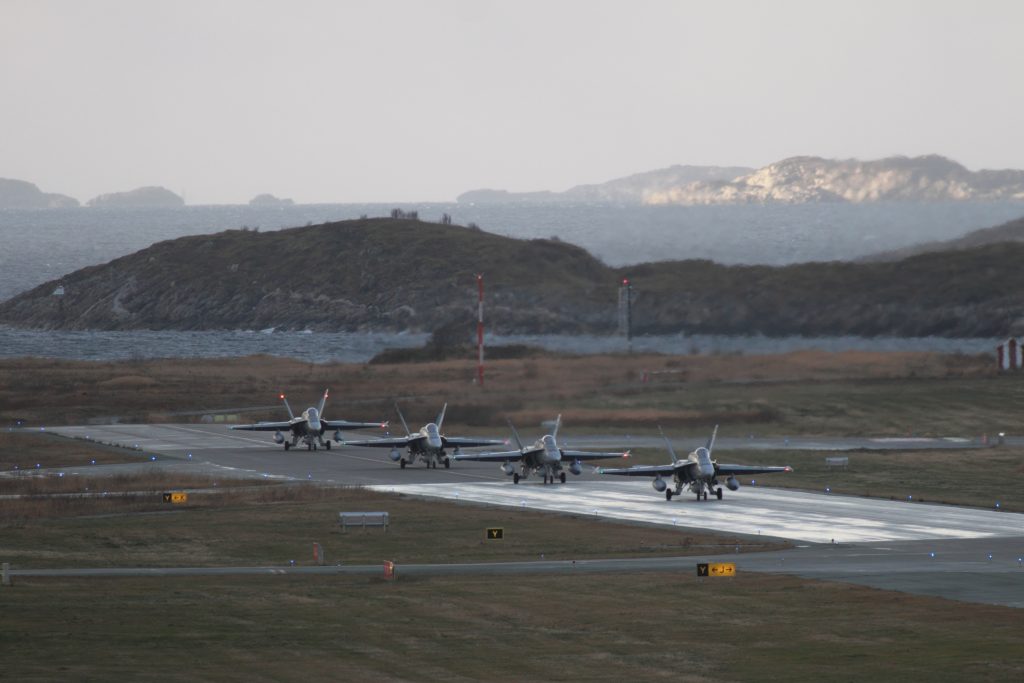 Since so many complex missions were flown, and it took a day of planning to prepare for single mission, a complete squadron of 18 pilots was present. Before the actual mission, an international mass briefing was performed, followed by an individual flight or group briefing in the temporary Canadian squadron HQ. Radiff also gave special credit to the maintenance crews who worked in two and when needed even three shifts a day to keep all aircraft in pristine condition. The crews used special pack up kits, filled with tools and spares, that can be flown in on board of a CC-177 or CC-130. In addition the maintenance crews cooperated with the Spanish contingent, housed in the neighbouring shelters with their EF-18M Hornets.

When asked whether he preferred the Blue or Red Forces role, Radiff is clear: “fighter pilots like to win! So Blue.” But in the end most is learned by performing both roles, in different circumstances. “It is all about passage of knowledge!” 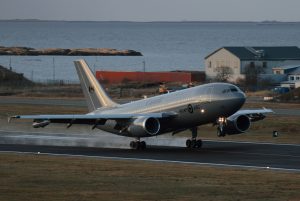 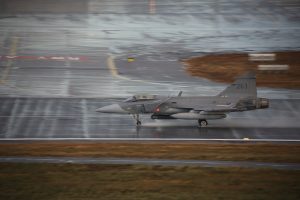 Radiff states the F-18 is the best defence procurement to date. “We continue updating the aircraft and it is a great platform today.” This was reflected by the fact that no missions were cancelled due to technical reasons. Only reason to cancel a few missions was wind exceeding the peacetime safety limit of 35 knots. A useful feature of the CF-188 is the folding wings. By operating a handle in the cockpit, the pilot can fold up the outer part of the wings. This way it was possible to put no less than three Hornets in a single shelter, which was very useful with every bit of space on the airbase needed during the exercise. 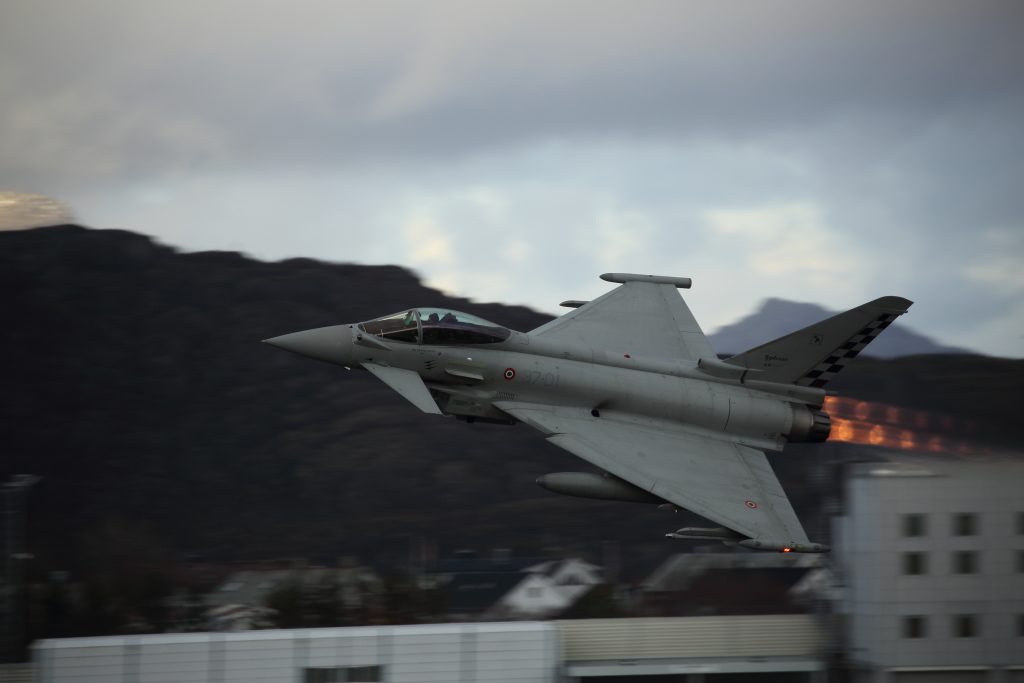 Impressive take off by Italian F-2000

One of the reasons to hold the exercise in Norway in this time of year, was to train under harsh weather conditions. But as with everything, all is relative. “It is quite warm here actually” said Raddiff with a grin, used as the Canadians are to ‘real’ winter weather. However, for most participating soldiers, the weather has certainly been an extra challenging factor. Either way, for Radiff Norway hosted them as second to none. 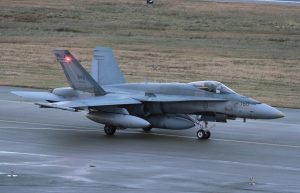 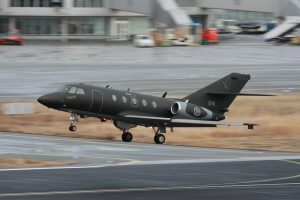